You’ve all heard the paraphrase, “he must have a fast metabolism, that’s why he stays so thin/lean”.  Well, let’s think about that.  The physiological definition for metabolism is: the net effect of all catabolic and anabolic reactions.  Doesn’t sound like a recipe for weight management.  Catabolic reactions are those that separate larger molecules, like proteins and fats, into their constituent molecules, like amino acids and fatty acids, respectively.  Anabolic reactions have the opposite effect, synthesizing smaller substrates into larger particles.  Like many products of nature, what you are left with is the net effect of everything you add plus everything you subtract.

Metabolism is essentially a set of chemical pathways.  Metabolic action serves essential functions of the cell, such as energy provision, creating structures, reducing structures, and cellular signaling.  (This last feature is most interesting.)  The chemical pathways that comprise metabolism are foundational to life itself.  Alterations to these pathways are now understood to contribute to disease and dysfunction.  In order to operate in the manner intended, your cells require delivery of the results of digestion and respiration.  If something isn’t present when needed, or if something is present that doesn’t belong, altered metabolism occurs. 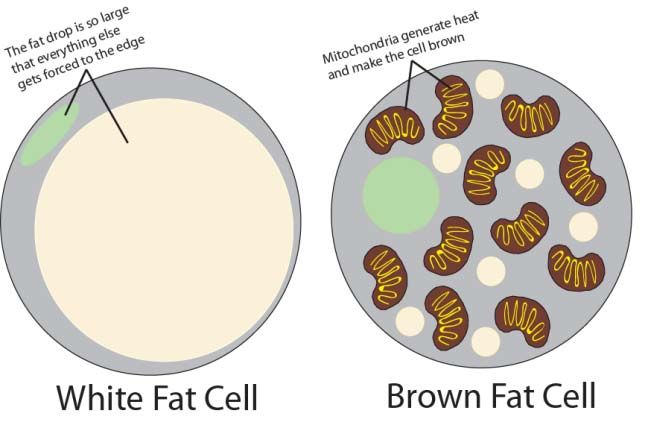 Now, you don’t store calories, you store triacylglycerols.  (And you don’t actually “store” them, either.)  Triacylglycerols are fatty acids bound to form lipid droplets—fat.  Though very small, triaglycerols do take up space, and if you have enough if them together, you will need more space.  A calorie is the amount of heat energy required to raise one gram of water, one degree celsius.  We can argue that calories refer to food and then, I would at least see your point.  We can go further and say that you can have an excess of x amount of calories hanging around in the form of tricylglycerols, and then I’d ask you to think about what that means.  Why is the body accumulating excessive triacylglycerols?  Why is metabolic action favoring anabolism?  You might begin to see that it has nothing to do with the rate or “speed”.

Many folks only think of the word metabolism only in relation to the their leanness (or fatness).  Many others only think of metabolism in relation to energy provision and their ability to do muscular work.  Brain cells are in the business of controlling the system and of thinking—you know, brain work.  Blood cells are in the business of delivering substrates and molecules to and from cells.  Adipocytes (fat cells) are in the business of acting like a sink for triacylglycerols.  Muscle cells do physical work, and so forth.  The combined catabolism, anabolism, and energy extraction of the same substrates—and the cellular signaling of these actions—is in effect used for different things in differing types of cells.  Why is the body accumulating excessive triacylglycerols?  Because the metabolism of one or more tissues is altered.  And this has nothing to do with heat.

What is causing this system dysfunction?  How do we resolve this dysfunction such that the body will liberate its adipose tissue mass and properly manage energy regulation?  A health educator would suggest a change to your personal behaviors in such a way that restores system function.  Count calories?  Hardly.  Yes, there is documentation of a male who lost body fat while eating a hypocaloric diet consisting of only Twinkies.  That unlucky individual’s body does not wholly express system dysfunction through adiposity.  I’d like to hear what a conversationalist he was during this time period.  Don’t be fooled and waste your time.  Remove the environmental encroachments to your system, and add those system-friendly practices like proper eating and physical activity.

We tend to lack a focus on the quality of food.  If the metabolic pathways do not have all the raw materials they need to function properly, you will be in trouble.  As an educator and researcher, I see the body through the lens of chemistry. What effect do energy drinks, convenience foods, beer, and other chemically-ladened foodstuffs have on metabolism?  It’s not the speed of the metabolism that counts, it’s the robustness of it.

The earth doesn’t care about your success and neither does the guy down the street.  To be honest, there isn’t a need for more humans, so even from nature’s perspective of species survival, you’re not very important.  You are important to you and to those around you.  Take some interest in your own function.