If you’ve purchased the idea that your unconscious brain can learn to chronically hyperventilate while at rest, then it is a small stretch to understand that this also happens during exercise, but to a much larger degree than at rest as air hunger increases when engaged in very intense activities. As part of the normal metabolic processes of ATP production during mitochondrial respiration, the increased cellular activity of skeletal muscle during physical work creates increased levels of carbon dioxide (CO2), which gets pushed out to the blood. Pulmonary ventilation (breathing) exhausts CO2 from the blood. Remember from the last article that you need a certain level of CO2 in the blood for health and function so you don’t want to blow off too much CO2, but just enough. 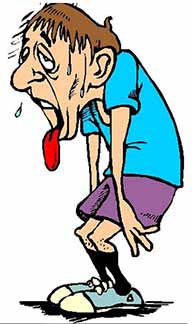 The definition of hyperventilation is not what you might think—it is ventilating at rate higher than necessary for removal of excess CO2. That is, you are breathing too much—moving too much air—than is necessary to maintain adequate CO2 levels in the blood, and this can be far more pronounced during exercise than at rest. Hyperpnea is an increased ventilation rate that maintains healthy CO2 levels in the blood. Hyperpnea during exercise or physical activity should be expected due to the increase in metabolic CO2 production by the working muscle tissue. If you chronically, low-level hyperventilating at rest, then you are certainly hyperventilating during physical activity. And due to the Borh effect, just when your working muscles and brain need an increase in oxygen, the relative lack of CO2 is limiting its delivery. This drags your anaerobic threshold down—the metabolic point reached when the duration of physical activity will be limited unless the intensity is reduced. Moreover, overbreathing during exercise increases the biological cost of the training session, making you less resilient to life’s other stressors and/or reducing the frequency of your training sessions, resulting in lower overall performance. The reverse is also accurate: Reducing your ventilation rate during exercise leads to a lower biological cost and allows you to train more often.

The only way to reduce your ventilation during exercise is to practice. You have to practice controlling your breath during exercise and reducing the intensity of the exercise if breathing grows beyond your control. You should also practice some form of breathing at rest, with the goal of reducing your unconscious ventilation rate. This often overlooked activity that most of us take for granted will increase your physical performance to unexpected heights if properly harnessed. It’s one of those things that you need to experience to understand… I did, and many of my students did. Breath control and breathing practice is not something that is valued in the Western world, many but Eastern cultures have known about the benefits of controlling the breath for a very long time.

I personally ignored breath control of any kind for most of my life. I used to always run or train at a high intensity, with my mouth gaping open and sucking wind. First, I decided to close my mouth and breathe only through my nose. I had to slow down and train less intensely for a while (quite a while, actually), but then my ability to train harder returned—except now I was nasal breathing only. The effects were significant: I recovered much faster, I trained hard without excessive ventilation, I rarely felt muscles burning during training, and I slept much better.

Next, I took up a formal breathing practice at rest. My mood and mental attitude improved almost overnight. However, it took much longer for me to see the effects of my breathing practice to appear during activity, but when it did finally carry over, it had an incredible impact on my training. The key to understand is that this process is a slow one, but it will happen. Moving less air while you train allows you to work at very intense levels without the associated negative effects from anaerobic energy production. You’ll have to experience this for yourself before you understand. The dial on your CO2-ostat adjusts at a very slow pace, and only from concentrated consistent practice—but it is well worth the time investment.

Comment to citation: Although this scientist only published data on a limited number of subjects, it should be noted that the blood lactate levels dropped by 66% for the same training intensity in as little as six days of controlling breathing during activity—and this occurred in elite-level runners! There are plenty of other studies establishing a connection between lowered blood lactate levels during exercise and breath control.

The vector image is created by Vectorportal.com

2 thoughts on “Breath Control During Exercise”